The Economy of Sex – When Sex Is Cheap, So Are Relationships 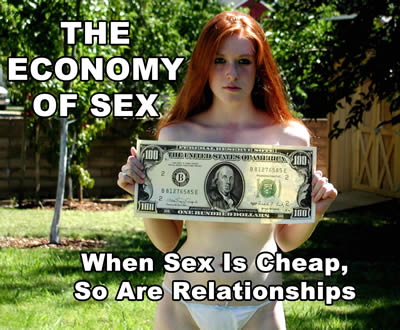 In the day and age of digital romance and sex, sex, sex, it’s getting harder and harder to create long term-relationships, so let’s have a frank discussion about how you can create a long-term relationship. Many women come to me and ask where all the good men are, as if somewhere between work and home there is a secret man-cave where they are all hiding. Of course that isn’t true, but why is this the perception of so many women? On the other hand, men are finding it easier and easier to get no-strongs-attached sex, but not all of them want it.

When women rise in power, when it’s easy for them to extract resources from the world, sex rises in supply. When disadvantaged women have to barter sex for resources, the price of sex goes up. When women rise in power, men respond in 1 of 3 ways. Roughly about 30% of men lose ambition to strive to be a provider (i.e., video game nerds in their parents basements until they’re in their 30’s, and even stay at home dad’s, a complete role reversal for men, fall into this category), while others lose the ability/willingness to commit. You’ll understand why in a minute. And then there’s the “good guys”. They feel pressured to seek more sex (become a “player”) because that is what they feel is being expected of them, and they lose their authenticity through this expectation.

When women rise in power, they respond in 3 different ways too. Some women adopt a male model of sexuality, and this causes a number of problems for them. Remember when I said guys won’t commit? Why should they when sex is so at the ready? A second problem is that women are falling in love with men who aren’t likely to stay around, much too easily. Other women hold out for a higher status man (a.k.a., the George Clooney Effect), where men are being overlooked by a class of women who are constantly thinking they can do better. And with the way men are responding, there are less and less of these high-provider, willing-to-settle-down type of guys. The 3rd problem is that women lose the freedom to be mothers because their biological window closes, or they believe the in-vitro myth. Every time they see another story about a couple who had a baby this way, the idea is reinforced in their mind, but this is just a higher-than-reality marketing stat as it only works for about 15% of those who try it.

What ends up happening to both men *and* women, is they are shuttled into the sexual mass market. They start believing that sex is cheap, and that people are having much more sex than they actually are. Tinder and other hookup apps help spread this idea, as does all of the sexualized marketing you see in magazines, billboards, commercials, online, and anywhere else you look. Men are thinking “Have all the sex you can, whatever the cost may be!!!”, while women are thinking “Have plenty of not-too-much sex”. This is the sexual double standard. Men who have more sexual partners are admired for it as studs, while women who have more sexual partners are looked down upon as sluts.

The high tech, mass-produced, fast, junk-food sex is not what we need to create the long-term, loving, trusting relationships we need. Instead, the solution here is to slow love down, start charging a much higher price for sex, and quit low-nutritional relationships just as we would quit eating fast-food if we were trying to lose weight and get healthy. Both men and women who are seeking a long-term relationship should not be having sex with a new partner too quickly. Instead they should wait to have sex with a new partner, to hold out on sex longer and allow for the emotional intimacy to develop in their relationship.

Men and women need to be focusing on two things… Care and Commitment. To do this, they need to set a high-criteria for a relationship. They need to talk more, share more, make themselves vulnerable, see only one person at a time, invest in each other, require sexual exclusivity, talk about the feelings they have for each other, and practice intellectual commitment, where they make conscious decisions to behave as if they are in a long-term relationship.

Why should you wait to have sex though? If you really need a good reason, here’s one. A scientific study revealed that if you have sex within 30 days of meeting someone, you have a 90% chance of being broken up with them 1 year later, as opposed to waiting 31 to 90 days, where you have about a 25% chance of being together 1 year later. Isn’t that enough of a difference to make it worth it and just wait it out? I think so…

Research into 5 “blue areas” on the planet, where people over 100 years old have been found in abundance, showed that long-term, committed relationships were one of several things they all had in common. In fact, men’s health is vastly improved, women’s is too but not as high as mens, when they remain in long term committed relationships. [The polyamorist in me is screaming to leave out the word “monogamy”, but the fact is that these relationships were also monogamous in nature.] Not only are these people living longer and healthier, they acquire more wealth and their offspring do better too. Who doesn’t want their kids to do better?

I want to close with an interesting number… When asked which men would prefer, a hookup (no strings attached, one night sex) or a romantic date, a whopping 75% of men said they would prefer a romantic date! So there’s still plenty of hope for the ladies, they just may need to curb their desire for George Clooney a bit and settle down with a guy who is every bit as interested in a long-term, committed, loving, trusting relationship as they are.