Open Letter To Men Who “Brag”

I get it. We’re guys. When you’re talking to me (or any guy), you want to be seen as a “manly man”. You want me (and other men) to respect you. And with me specifically, because I’m a dating coach, you might think that talking about your exploits with women are a way “rub elbows” with me, that you’ll earn *extra* points with me because you got it all figured out. That *is* typically how men get along with one another, so one would naturally think this was the way to do it.

Every man alive wants to have it all figured out when it comes to women, or at the very least he wants other men to *think* that he does. Men will often embellish their stories and inflate their “numbers” so that they’ll be seen as “worthy” by other men. If a man is *lacking* in results though, he will often create reasons and excuses as to why, and it will always be something that he will be perceived as having control over in order to successfully cover up his fatal flaw.

But here’s the thing… Here’s where all of these guys lose me, other men, and the majority of women too…

And that’s EXACTLY why none it works. It’s dishonest and manipulative, and I see right through it Every. *Single*. Time. Just like women do. It’s tiring in way, actually, to deal with this over and over. And if that’s how *I* feel, I can only imagine that women feel this more intensely than I do! I distance myself from this behavior, don’t participate in it when the chance arises, and I actively avoid trying to build friendships with men who do this. I don’t want to be your buddy. I don’t want to hang out with you. I don’t want you in my social circle. I don’t even want to have a public conversation with you. You want to know why?

Because at some point or another, you’ll embarrass me in front of women. Not because I’m responsible for what you did, but because women will think less of me for keeping your company, or for defending you after you’ve done something to socially embarrass yourself. Even if you’re completely unaware of it, me, and the women around me, aren’t. We saw it when you didn’t, and that even further erodes your social status with us.

Nothing good can or will come from this. The consequences for talking about, embellishing crazy sex stories, making them up entirely, sharing intimate moments that should remain private, or even communicating extensive results when they’re real, does the following:

– Turns off low-quality women because they don’t want to be your next exploit and they don’t like your ego (lost access to a good portion of women, hurts your reproductive success)

– Alienates you from high-quality women because they see right through you (lost access many more women, I said it hurts your reproductive success, right?)

– Attracts low-quality men to you, who have the same need for admiration, acceptance, and validation as you do, who will admire you and feed your constantly inflating ego until one day it pops 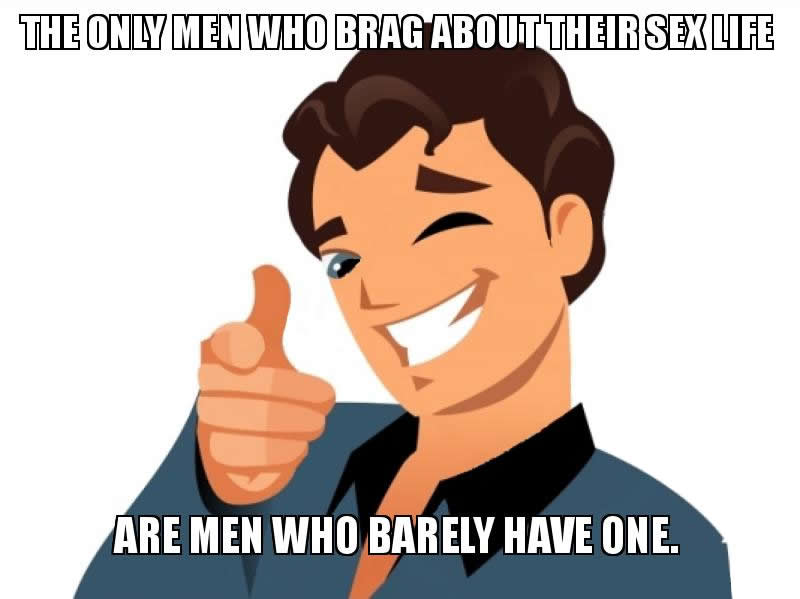 The problem with this is something that goes deep into your emotional psyche. If you’re seeking acceptance, admiration, and validation from some external source that is NOT you, it’s because you lack that internally for whatever reason. It’s likely tied to your father being emotionally distant from you and not giving you the love you needed from him, and so you end up spending time in your adult life seeking out that acceptance, admiration, and validation from other men trying to fill the void in you.

So hanging out with, or far worse, dating or being in a relationship with a guy like this, is detrimental to a *woman’s* social status because their friends and family are likely to pick up on you too. Then said woman needs to deal with the consequences of that, and it can be tough to defend someone like this from people who care about and who know them a lot more than they care or know about you.

So, now that you know the problem is, and what the ramifications are, what can you do to fix it?

Earlier I mentioned that being *inauthentic* was the problem, so the obvious answer is to do the opposite of that and just be authentic. Being authentic means being real, not wearing a mask, not trying to impress, not trying to make someone think something of you that isn’t accurate or true. This requires a level of vulnerability, so let’s talk about how you can achieve this because it’s a tough concept for men who are afraid that telling the truth will hurt them.

The first thing you can do is to start being brutally honest with *yourself* about your results with women. If you’re guilty of any of the aforementioned behavior, admit that to yourself. See it for what it is and stop doing it. Be accurate. Don’t embellish. Be VULNERABLE. Let the world see who you *really* are, warts and all.

Admit you don’t have it all figured out with women. If you ever hope to have this figured out, it starts here. As a coach, I can’t help someone until they’ve admitted they need it. But take me out of the equation and you still can’t help yourself until you’ve admitted it either. If your mind is closed from the very beginning, nothing said to you will filter through and you will not improve.

ASK FOR HELP. I cannot stress this one enough. If you’re not actively ASKING for help, you’re NOT getting better, aren’t you? Ask and you shall receive. I know you’re thinking there’s some sort of embarrassment about admitting your faults, especially when it comes to a lack of results with women, but the simple fact that asking for help *shows* courage, says that you *have* courage, and that’s something to be proud of. Men and women alike will recognize this and you’ll win them over with your integrity, as opposed to your lack thereof.

I’ll let you in on a big secret… Men who are “good” with women don’t talk about it. They don’t need to. They don’t need to impress anyone, and they don’t need acceptance, admiration, and validation from other men enough to be dishonest. They have other ways to earn the respect, acceptance, and admiration from men that is essential to their masculinity. No one, and I repeat NO ONE, cares about how many women you’ve slept with, your crazy sex stories, or whatever else you may feel the need to brag about, except men who are seeking the same acceptance, admiration, and validation from other men that you are. Men who are actually good with women realize that this is the quickest way to lose them.

Finally, you need to learn to love yourself on the inside. This takes some personal work on to get there, but it’s worth every ounce because it opens up so many more doors for you in life, especially but not only with women. When a man loves himself in a healthy way, and he exudes that in his life, he is irresistible to women.

If you’d like to chat privately about this, send me a message. If you’ve interested in patching this up through coaching with me, reach out.