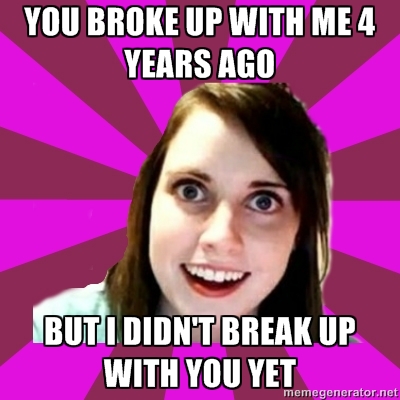 PART ONE: MY STORY

Yeah, ok. I admit I stuck it in the crazy once. It’s part of my dark black past that I’m a bit embarrassed about. But that’s what happens when people don’t present themselves as who they really are, when they put on a front so convincing they believe it themselves.

But I definitely learned a lot from that experience, and that’s what led me down this path to where I am now, to where I’ve spent the past 4 years of my life figuring out dating and relationships. So at least I have that.

So it’s been 4 years since I broke with her and she’s still chasing me. She’s still got me listed on her Myspace and Facebook pages claiming we’re married. For the record we aren’t now nor were we ever married. But that’s the world she lives in. She tells her friends and co-workers we’re married.

At parties I’ve talked to girls I’ve never met who knew her somehow, and they recognized me. “Oh, you’re so and so’s husband, aren’t you?” No, that’s the lie she tells everyone because she thinks she can lie her way back into my life. It’s like, that’s why I left you in the first place!

The real problem is that she keeps lying to everyone until she believes it herself, and then she acts on it and tries coming around again. That’s, I think, when she needs a good hard slap back into reality. Not her reality, because that’s obviously not ever going to happen, but my reality, where I’ve let go and moved on.

She just doesn’t get the message that I’m not ever going to be with her again. EVER. It’s a very pathetic life she’s living. And when I say pathetic I mean it with compassion. This poor girl. She’s wasting her life pining after me and I want nothing to do with her.

Doesn’t she respect her self? Doesn’t she deserve to move on and find somebody else? Isn’t she worth at least that? Life is too short to waste on someone who can’t or won’t return her affections, who will never share her attraction.

I’ve always tried to remain civil. I’ve respected her space and her privacy. Not like I’m here to point her out by name. That’s just mean, not to mention immature. I’m not here to harm her, nor would I want anyone else who is being stalked to harm their stalker.

Coming up in PART TWO:

UPDATE: More and more people are finding and reading these articles and are contacting me asking for help, so I have decided to start a private Facebook group for people who would like to vent, ask for help, connect with others, learn how to fight back, share their stories, and whatever else will contribute to others. To join the group, send me a friend request and a message on Facebook (I can’t add you otherwise because it’s a secret group), and I will add you.